The end of the season comes to a close in dramatic fashion…but not exactly as planned.

Ironman Arizona was the big race on my schedule this year. Everything I did throughout the year was part of the big picture…prep for IMAZ. My training has gone as planned all year. Stay healthy and injury free as I completety some of  the biggest training days, weeks and months ever. Coach Brian (Accelerate3.com) put together a great plan for the year and I got out there and got the job done. I was fit and ready to go leading into the big day.

I arrived in Tempe on Friday afternoon. Headed dirrectly to Tempe Town Lake Park home of the Ironman village and went through the registration process. The line was short and I was in and out in a short time. I took a quick look around the expo. I then headed over to the Slowtwitch.com gathering/pre race festivities. Had a good time eating free food, meeting internet friends and catching up with friends. From there I was off to the pre race pasta dinner. Got plenty to eat and watched the festivities. I then headed over to my good friends Victor and Stephanies house who were once again kind enough to host me for my race stay…thanks again for opening your house to me!

After an unusually restless night I got up Saturday morning and got my gear sorted out. I then headed to Tempe Town Lake. I racked my bike and dropped off my gear bags. I then got into my wetsuit and got in a quick 20 minute swim during the “practice swim”. The water was a cold 61 degrees…a shock when first entering the water but near perfect once you got warmed up. Got in an easy 10 minute run just to test the legs out. Took in some more carbs for lunch and then threw the feet up for the rest of the day. With my mom dog sitting (thanks mom), my wife drove up to watch my race.

Another restless night of sleep was followed by my alarm going off at 4am. I ate a breakfast of yogurt, a bagel and a banana, then loaded up my gear and headed off to the race venue. I arrived at the site at 5am. I like to have lots of time to prepare and relax before the race. I got my tires pumped up and double checked everything. A rouge body marker strayed our way and I was able to get body marked while waiting in the air line…killed two birds with one stone! I then made my first trip to the porta potty while the lines were short. After a little time to relax it was time to get into “race mode”. I made one final trip to the porta potties. I then bagged my morning clothes and got into my wetsuit. I dropped off my morning clothes bag and then worked my way to the front of the “waiting to get hearded into the water” group. Soon after they started letting us into the water I jumped off the boat dock and started my swim to the start line. As I was swimming I heard the cannon go off signaling the start of the pro race and meaning we had 10 minutes until our start. I found my spot near the front on the far right side along the buoy line and bobbed around in the water waiting to go. The water started getting crowded and the national anthem was sung. It was getting close to time to go.

With AC/DC ringing out through the PA system the cannon blasted. 2500+ flailing bodies were put into motion. The swim is a one loop 2.4 mile journey. I had a good start with minimal body contact. On the outbound portion of the swim things went pretty smooth. The occasional contact or person grabbing my ankles. I swam the buoy line…a bit longer but much less crowded. I hit the turn around and found the water was a bit choppier for the return trip. I had open water for much of the return running into the occasional crowded spot but nothing to eventfull. I hit the final buoy and turned towards the exit stairs…man, that first step is a big one. With a helpfull hand from a volunteer I found the step and was on my feet.

Was hoping for under 1:05 but was still happy going 2 minutes faster than my last IMAZ.

Stripped my wetsuit, quickly ran and grabbed my gear bag and found some space in the change tent. Threw on my bike shoes and helmet. A volunteer bagged my swim gear for me. Off I went to my bike. A kind volunteer attempted to get my bike for me but I outan him and got it on my own. I ran to the mount line and made a smooth “flying” mount and was on my way.

The 112 mile bike is three out and backs through Tempe and out on the Beeline Highway. I quickly got comfortable on my aero bars and settled into my pace. The first loop I felt great, was comfortable, weather was near perfect and wind was light. At the turn around I was a little under my target pace (goal was to break 5 hours). It hit the end of the first loop feeling good and on target for a 4:45 if the conditions stuck around. Heading out on the second loop the course was getting a bit more crowded with the slower competitors now on course. I was focused and sticking with my pace and nutrition. Things were going good. Out on the Beeline for the second time I was feeling good. I saw pro triathlete Ian Mikelson loudly cheering me on! Thanks Ian. Passing traffic I had a clear patch of road. I looked ahead and saw the closest cyclist ahead was a good 75 meters ahead. I dropped my head to stretch my neck a little…a little to  long! As I looked up I was going into the back end of the cyclist ahead. I went down at 24mph. Luckly the other rider continued on unscathered…I would have felt really bad had he gone down too. A little road rash to the knee, hip and elbow…ouch. I quickly got up, got out of everyones way and attempted to get on my way. No such luck…my chain had come off and was tangled. Several riders offered assistance, I waved them off and thanked them. I again heard a nother voice offer assistance and was about to wave him off when I realized it was the support guy. With the extra set of hands we quickly got the chain sorted out, I thanked him and was again on my way. To those that offered assistance I thank you again! Once back up to speed I settled back into my pace. My hip was bothering me a little and i was bleeding all over my bike. Having an open wound on your elbow/forearm makes aero bars much less comfortable. The winds were still pretty mild. I finished the second loop and was still on track for a sub 5 hour ride. On the third loop the wind decided it was time to play. Going out the beeline it was a slight side wind. Once I hit the turnaround though it was pretty much a head wind the whole way back into town. A few close calls later, people swerving out in front of me to make a pass without looking first put me into “safety” mode. I began to pass as far left as possible to prevent any further misshaps. As I closed in on the finish of the final lap I began to prepare for the next leg. For the third time entering the hot corner/turn around area the crowds were huge. Lots of cheering, loud! I absorbed it for the final time as it helped recharge my batteries. I slipped my feet out of my shoes and made my running dismount. I handed my bike off to a volunteer and ran for my gear bag.

Missed my goal time but considering all that happened was happy with my ride. 3 minutes slower than my fastest Ironman bike split.

Was now in 8th place in my agegroup and 147th overall!

After grabbing my gear bag I removed my helmet and ran into the change tent. Once again the volunteers were great. Sat down to change my shoes…volunteer took care of me, water and assisted with bagging my gear. Bike shoes off, run shoes on…hat, glasses…run!

Entering the run course the crowds were huge and loud. I told myself to go out easy. The 26.2 mile run course is made up of three “figure eight” shaped loops around Tempe Town Lake and Papago park. I made a quick stop at the first porta potty. I then began my run nutrition…coke and water. My legs were feeling the efforts from the bike but felt reasonably good. The first loop of the run my right forefoot was bothering me. Possibly a side affect of my left hip striking the ground when I crashed. I pushed through it and by the second loop the pain had gone. Each lap the TriSports. com aid station would get me fired up…they made me feel like a rock star every time I passed through. Their disco themed costumes brought a smile to my face. That was followed by the Phoenix Tri Club aid station with it’s cops and robbers theme. Nothing like girls in “sexy” cop outfits to lift your spirit. The star/end of each loop took you behind the transition area and the crowds gave me a shot of energy. The second loop was up and down…feel good for a while, then not so good, repeat. By the third loop my stomach decided it wanted to have its say. A couple porta potty stops kept it at bay. With 5k to go on the run I decided to give it everything I had left to the finish line. Recharged passing through the TriSports and PTC aid stations for the final time I pushed the pace with all the energy I could muster. Through the crowd one last time I made the turn towards the finish line. The final stretch the crowds were insane! High fives to all that offered…the celebration was on. Mike Riley called out my name on the pa as I crossed the finish line and collapsed into the waiting arms of a “catcher”. My legs were done! I was done! Ironman #15 was in the books. 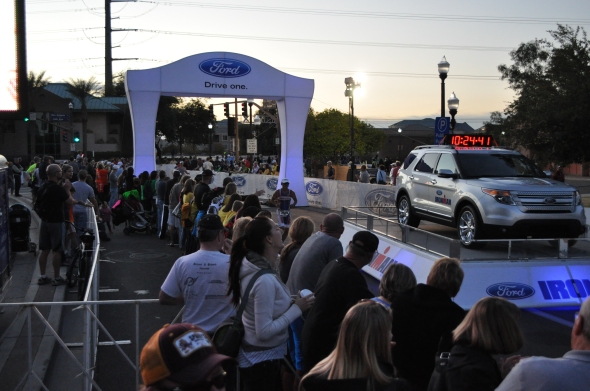 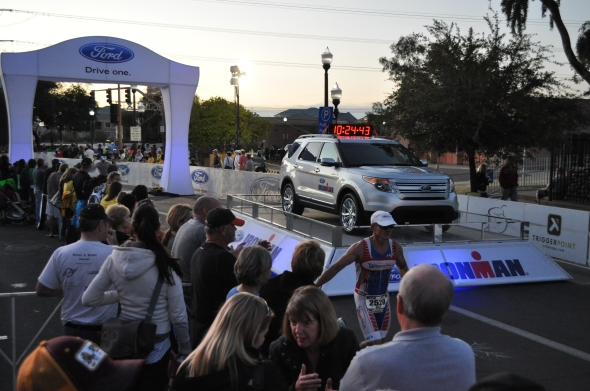 High fives for everyone!

My second best Ironman run 8 minutes off my best.

My second best Ironman effort, 10 minutes off my PR.

Now I’ve got a little down time to cure all the sore muscles, aches and pains…then it will be time to begin next years journey.

Special thanks to everyone cheering on the course, the awesome volunteers, Brian (Accelerate3) for all the coaching wisdom, TriSports.com for keeping me equiped with the greatest gear, Jaclyn for being the best sponsorship coordinater and most of all my wife for putting up with all my insanity and my mom (the best dog sitter!).

See everyne at the races next year!