Sunday was the second race in the Tucson Triathlon Series…the Firecracker Triathlon.

The alarm awoke me at 4am. A quick check of the tempature showed 83 degrees! With the desert monsoon season in full swing the air was also thick and sticky. After a quick breakfast of 3 Eggo’s I got dressed and jumped into my pre-packed Vehicross and made the 30 minute drive to the University of Arizona’s Hilibrand pool. Even though I arrived early there were quite a few bikes already racked. I found a good spot and set up my equipment. I then had a bit of time to waste so I caught up with a few old friends.

A kids race was held prior to the adault event. I volunteered to ride the bike course with the kids. A great way to get in an easy warm up and recon the course. The 11 year old kid I rode with was a blast. While averaging about 16mph he took the time to wave to everybody along the course…police, spectators, people at the bus stops! He was having a great time!

After that I went for a 10 minute warm up run and then got in the warm up pool for a bit. I was feeling pretty good.

By now the temp was well into the 90’s and the humidity was well above the single digits we are used to here.

The swim was a serpentine swim with swimmers starting time trial style every 15 seconds. I had the “honor” of starting in the very last position. Lucky me!

It was now time to race. The swim distance was 750 meters (long course). The starter gave me a 5 second warning and then GO! I quickly got into a smooth stroke. A few quick peeks into the lanes of those that started earlier let me know I was keeping a good pace. I focused on my stroke and counted down the laps. As the last to start I was the last to exit which would give me a lot of “rabbits” to catch. I exited the pool in 12:05…an 8 second improvement over last year and 32nd best of the day. I was off to a good start. 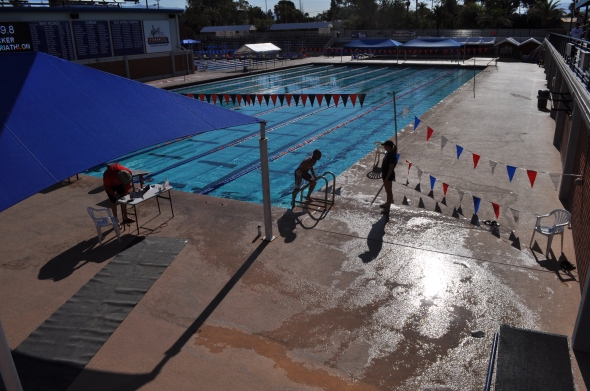 Last to start...last to exit. 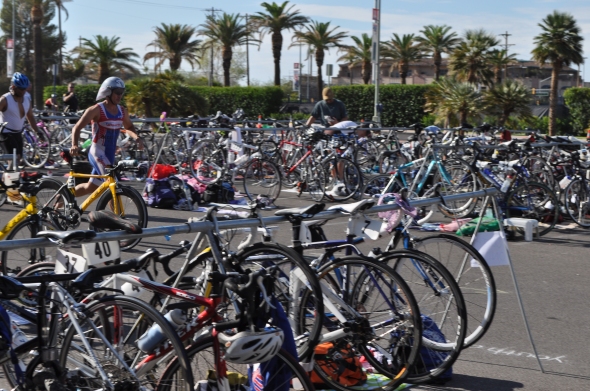 Out of transition I quickly got my feet into my shoes and settled into my aero bars. The course is a 3 loop 12 mile course. The first 2 miles of each loop are slightly down hill followed by 2 miles of a slight climb 1 mile of which is full of bumps and pot holes. I was going strong and quickly began to catch and pass people. The first loop was a bit congested and I found myself calling out “left” a lot to get around the slower riders. By the second loop the traffic had thinned and i was able to focus on just going fast. My legs felt good the entire time. As I came down the final section I slippped my feet out off my shoes and prepared for T2. T1/bike/T2 combined time was 29:52…20 seconds faster than last year and 7th fastest of the day. 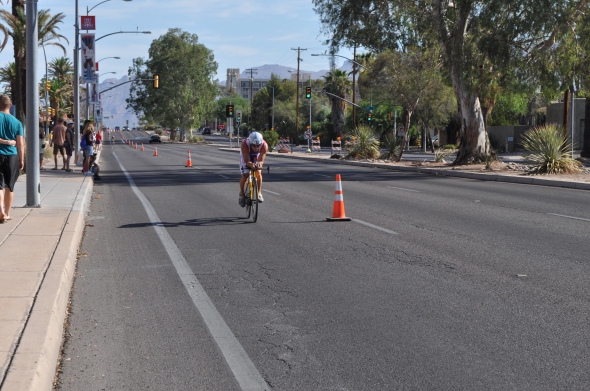 Flying down the bike course

T2 was again a fast one. Rack bike, remove helmet, slip on the Fasttwitch’s, grab race belt, hat and glasses…run! 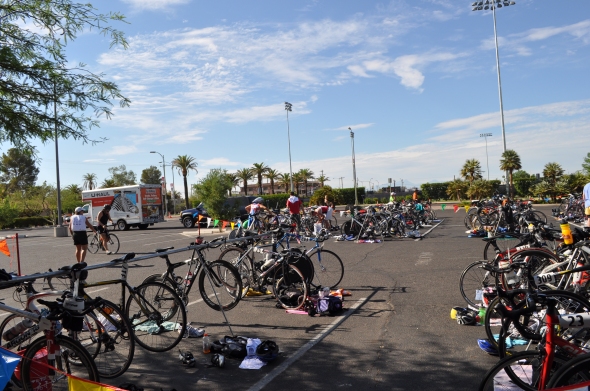 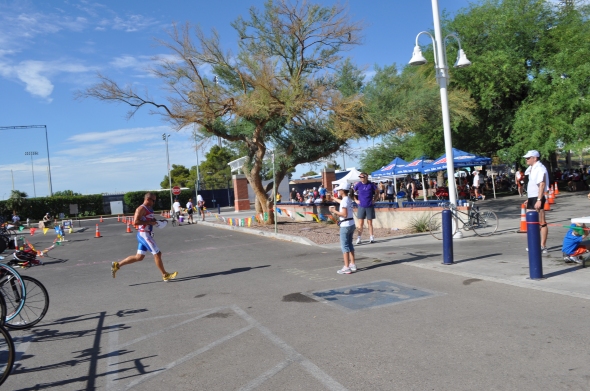 Getting dressed on the go

I imediately felt the heat and humidity but my legs were feeling good. The run course is a short out section, 2 loops and then a short section back to the finish totaling 3 miles. As I turned onto the loop section the front runners had just passed through to start their 2nd loop…rabbits to chace. TriSports.com CEO Seton Claggett was 2 steps ahead of me starting his 2nd lap. I jumped on his heels since he was setting a good pace. He slowly pulled away from me but i was able to keep him close. We were closing the gap to the leaders. At the end of the loop they turned of for the finish line and I headed out for loop 2. With no more rabbits it was time to focus and maintain my pace. I continued to catch and pass the slower runners that had started before me. I tried to keep the pace high but the heat and humidity was trying it hardest to slow me. I still finished with a strong second loop though. Run split was 19:32…3 seconds slower than last year and 7th fastest of the day. 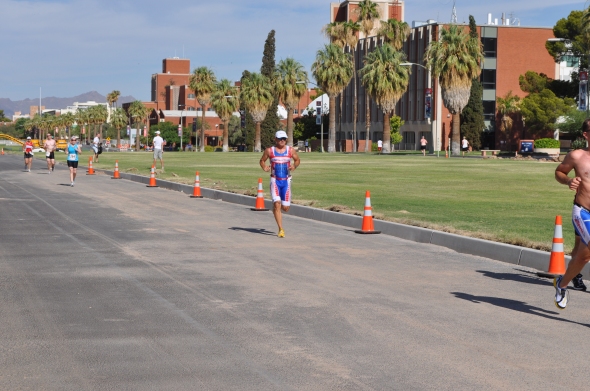 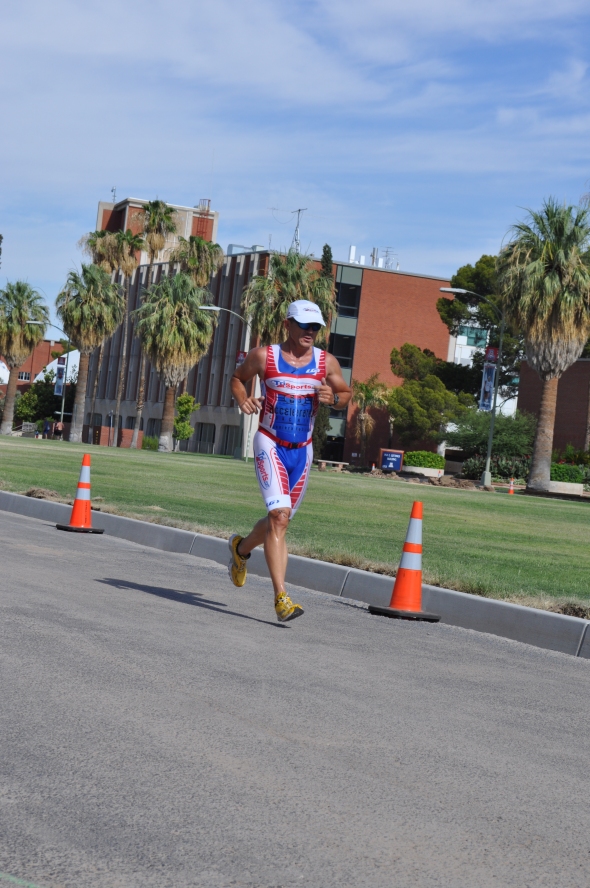 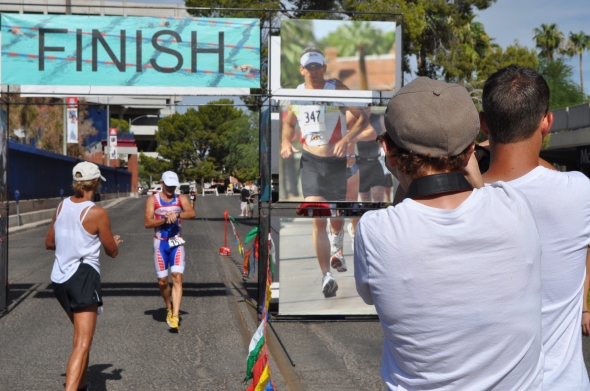 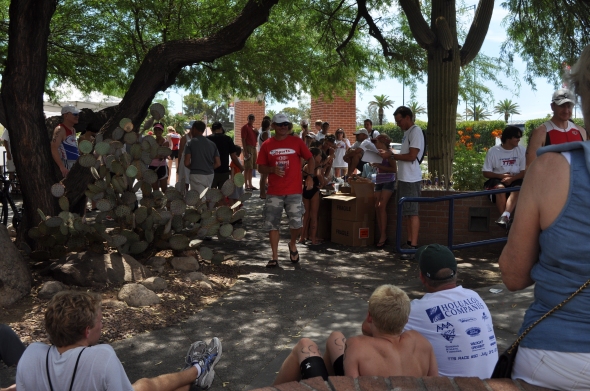