When you think of winter training in Tucson images of riding, running and swimming under clear sunshine filled skies come to mind.
Sunday I enjoyed a great long ride. Sunny skies and temps nearing 80. Although the 20-30mph wind kept things interesting.

Monday brought more sunshine for another great ride through the giant Saguro’s. Temps in the mid 70’s
Today woke to cloudy sky’s. Weather alerts were calling for blizzard conditions at high elevations. Figured I would try and squeeze in a ride before the rain started but I took my rain jacket just in case. Mid way through my ride the light cold drizzle began to come down a little harder. My trusty rain jacket was dawned and doing it’s job keeping me dry. A big headwind on the way out became a huge tailwind going home. About 4 miles from home the wind picked up even more, from 20-25mph to 30-45mph, the temp dropped quickly and in a matter of minutes the rain became slush and then full-on snow. Conditions quickly became near whiteout. It was cold! Fortuneately 15 minutes later I rolled into my driveway.

This was my front yard as I rolled up. 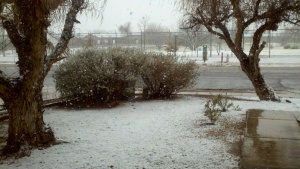 I had survived the Great Tucson Blizzard of 2013!

Just a few thoughts and updates…
My 2013 season schedule is shaping up to include the following races:
The Tucson Triathlon series
USAT Duathlon National Championships
Deuceman triathlon
HITS Havasu Full Triathlon
and possibly a few more to be determined as the season goes on.

The weather has been great here in Tucson for training (with the exception of a few cold winter storms that blew through). I have been putting down 18-19 hour weeks and still building.

I am again very happy to be sponsored by TriSports.com and powered by Brian Stover at Accelerate3 coaching.
Get your gear at the best tri shop and save 15% by using code “BOLIVER”. If you want to become the fastest you can be, be sure to shoot Brian a message.