Another season is getting close to the end. I have 2 races coming up soon to finish things off. First up will be the final race in the Tucson Triathlon Series on Oct14. I am currently sitting in 2nd overall for the series about 1min 30sec out of 1st and am leading my age group by over 20 minutes. With a good race I am hoping to take the overall series. It will be tough but I will give it my best effort.

This will be followed a week later by the SOMA half ironman in Tempe, Az. It has been a while since I have done SOMA and will be nice to return to this race. The legs have the mileage so we shall see if everything comes together on race day…will be nice to finish the year with a new PR on the course! 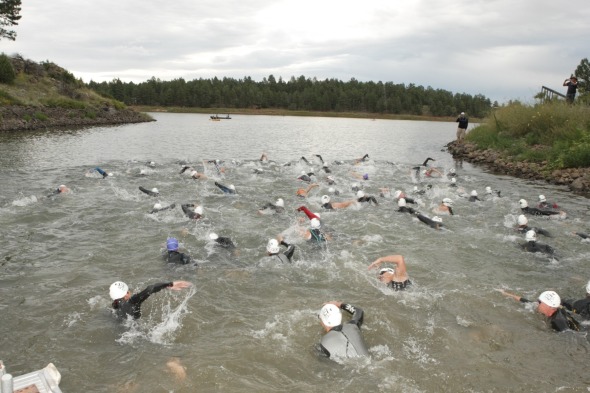 Biking through the pines 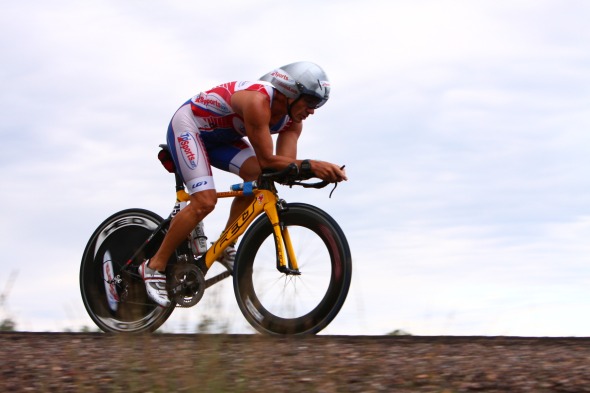 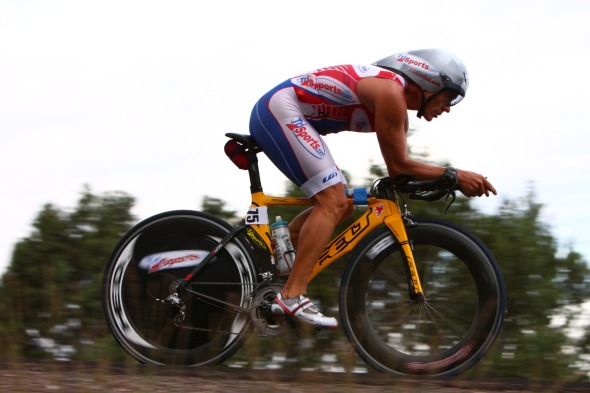 Running along the lake 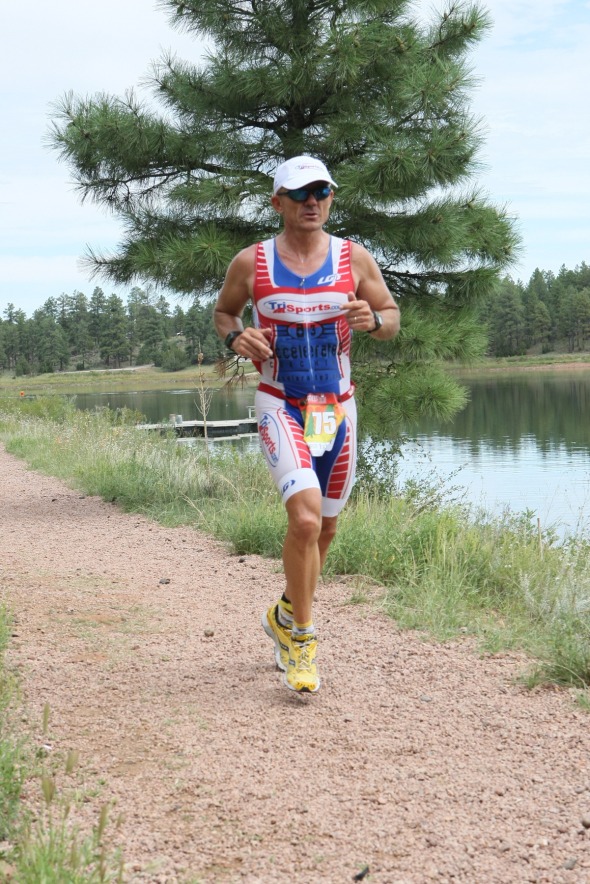 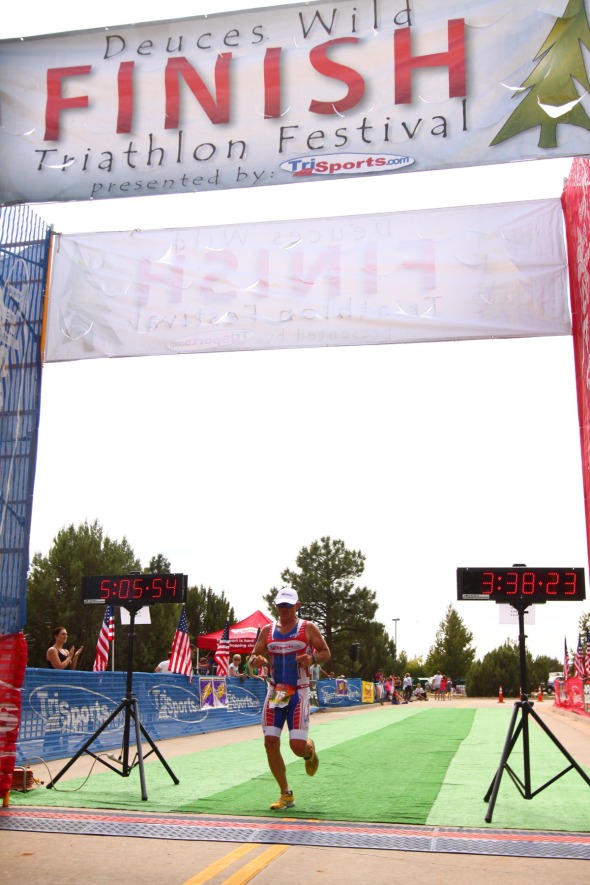 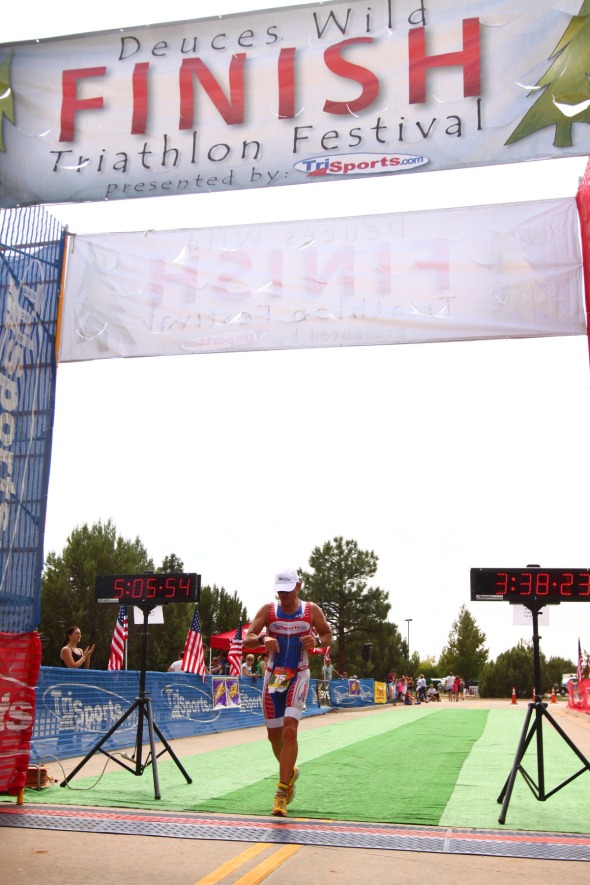 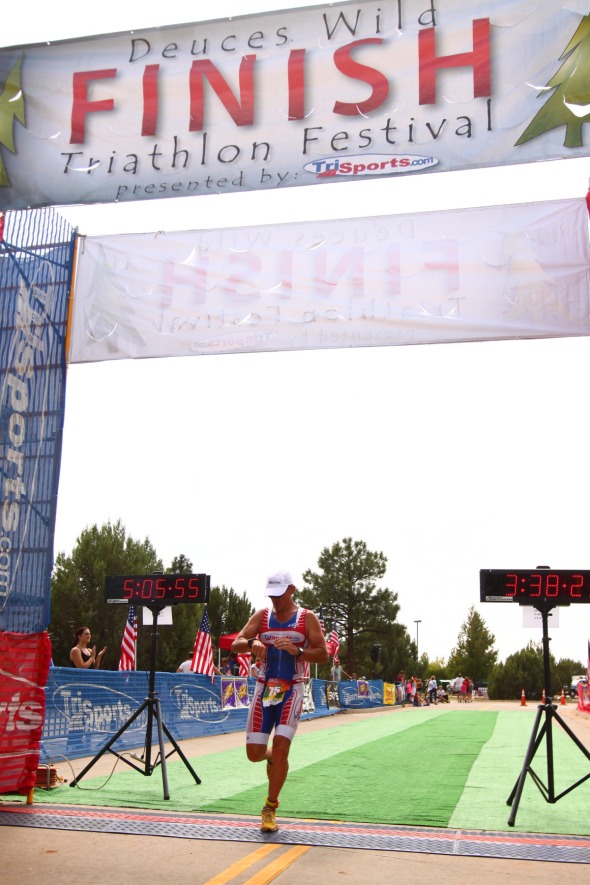 On Thursday Sep. 6 I celebrated my 48th year in this world. The following morning I packed my truck and headed up to the pines and high altitude of Show Low, Az. It was time for the Deuces Wild Triathlon Festival weekend put on by TriSports.com. The weekend includes an olympic distance triathlon and half ironman distance triathlon on Saturday followed by an xterra off-road triathlon on Sunday. I would be racing the half ironman on Saturday.

I arrived at Fools Hollow lake in the afternoon after a scenic 4 hour drive. I set up my camp site amongst the pines and within view of the lake. I then went to packet pick-up and then enjoyed a nice pasta dinner cooked up and served by the local school. I returned to camp and put the finishing touches on my race gear. As the sun set I relaxed a bit and then slipped into my sleeping bag for an early night of sleep. I slept intermittently throughout the night. I seemed to wake up every hour or two. My alarm was set for 4:30 however I awoke on my own at 4:15. I decided to get an early start on my morning. I ate a blueberry bagel, a banana and a “salty nut bar” for breakfast. I got dressed then through my gear backpack on and rode the 2 miles to the transition area by the light of my flashlight. The cloudy night kept the temperatures warmer than usual and the ride was a nice warm-up. I found a nice end spot on the racks and set up my gear. I got body marked then payed a final visit to the porta-potty. After a little socializing I slipped into my wetsuit and headed to the water. The water was a much warmer than usual 72ish. I jumped in and got a good 15 minute warm-up in. It was about GO time. As the national anthem was about to play there was some technical difficulties…no sound. As if planned the athletes bobbing in the water began to sing an impromptu version of the Star Spangled Banner…and a pretty good one at that!

The horn blew and off we went. I quickly found clear water and began my journey to the first turn buoy. The swim course is a 1.2 mile uneven triangle. The warm water and cooler air decided to wreak havoc on my goggles…they fogged.  I was swimming blind. I had to stop 5-6 times to clear my goggles. Each time I would have clear goggles for about 10 stroke then swim as far as I could with diminished view, clear, repeat. I felt comfortable throughout the swim. I made the final turn into the cove and headed straight to the boat ramp. A quick stop at the “strippers” and a run into T1. The thin air made that short run one of the hardest parts of the race…totally anarobic!

T1…short and sweet. Goggles and cap off, helmet on. Grab bike and go.

I mounted my bike and slipped into my shoes.

The bike is a 56 mile hilly affair. The first 15 miles is big rollers, followed by 25 miles of downhill rollers, an 8 mile gradual climb and then more rollers into the bike finish…2567 feet of climbing (Garmin). I was having issues with my rear derailuer throughout the ride. It would periodically “jump”. It was more of an annoyance than anything. I was continually looking for a “sweet spot” to prevent the jumping. I maintained a strong pace throughout the ride and felt strong. I consumed my nutrition like clockwork…a small bottle of gatorade with 1 scoop of Carbo-Pro for the first hour, a large bottle of gatorade with 7 scoops of Carbo-Pro and half  a bottle of gatorade from the aid station over the remainder of the ride. Coming into the final stretch I began to prep for T2. I slipped my feet out of the pedals, eased up a little and stretched out the legs. As I hit the dismount line I threw my leg over the bike and hit the ground running.

Into T2 I racked my bike, removed my helmet, put on my running shoes, grabbed my number belt, hat and glasses and hit the run.

13.1 miles and 633ft of climbing separated me from the finish line. My legs felt great. The run is a 2 loop course. It begins by following a trail along the lake, then kicks up a steep little hill through the camp grounds, a rolling out and back on a dirt road and then road back to the 2nd loop/finish. The first loop went pretty easily. I was averaging around 7:40 pace and taking in gatorade and water at every aid station. The second loop the sun made an appearance and warmed things up a bit. The 5600ft elevation also began to take its toll. The pace dropped into the low 8 minute, mid 8’s then high 8’s. With three miles to go I decided to walk through the aid station, took a gel, two cups of gatorade and a cup of water to try to revive myself for the finish. I was then off maintaining mid 8 minute pace to the finish.

Crossing the finish line I was handed an ice-cold popsicle! Awesome!

Great race, scenic and challenging course and a great $40,000 raffle at the awards!

On Sunday I was again up bright and early. After packing up my camp gear it was time to volunteer in the transition area for the Xterra triathlon. There was obviously a bit of mud on the bike course but they got to clean up before the finish with a run that included a waist deep  water crossing in view from my spot!